The Annual Flash Fiction Competition is held during each fall semester.

Flash fiction stories are extremely short stories  For our contest, each entry may be no longer than 500 words to be eligible.  Titles must be included in the word count.  Judges for the competition have included Jenn Rossmann, Kate Brandes, Margo Rabb, and Jennifer Gilmore. Student winners and honorable mentions read their flash fiction stories in a public reading with the contest’s judge. 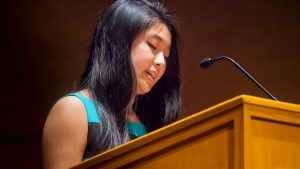 The MacKnight Black Poetry Prize is awarded annually in memory of H. MacKnight Black ’16, who at the time of his death in 1931, was regarded as one of American’s significant poets. He was particularly admired for his incorporation of technological terms and images in his poetry.

The Jean E. Corrie Poetry Prize, established in 1989, is awarded for the best poem by a first-year student, sophomore or junior. The prize is sponsored by the English department and the Academy of American Poets. The judge of the competition gives a reading at the Jean Corrie Poetry Reading & Ice Cream Social, preceded by students whose poetry was selected in the competition. Past judges have included Katherine Bogden, David Chin, Barbara Crooker, Katie Ford, Ross Gay ’96, Jared Harel, Steve Myers, Yolanda Wisher Palacio ’98, Beth Seetch, Ruth Setton, BJ Ward, Bob Watts, Joe Weil, and Javier Avila.

The 2018 Jean Corrie judge and featured poet is sam sax.

The Corrie Prize is held under the auspices of the Academy of American Poets. Academy prizes were established in 1955 with ten schools as participants. In subsequent years, the prizes have been awarded at more than 200 college and universities across the United States. Among the prominent poets who won recognition through an Academy College Poetry Prize are Sylvia Plath, Tess Gallagher, Heather McHugh, Mark Doty, and Jorie Graham.

Our Pulse Our People